Origin of the Sitara Toto Trust

We (Dipak and myself, Shital) have founded and successfully run two Montessori schools in the outskirts of London since 2004; the Sitara Toto Montessori and the Leavesden Montessori House. Our great passion for educating young children and thorough drive to keep looking for improvement resulted in the two schools being recognised as Ofsted Outstanding in multiple reports. Our personal and professional approach, accentuated by the acknowledged success of our two schools drew an increased amount of attention from parents wanting to enrol their children. This influx of enrolments drove Dipak, who had been an integral part of the schools behind the scenes, to officially become a full time member of our team in 2014.

The story of why we founded the Sitara Toto Trust began in 2017, when we decided to simplify our lives by handing our Sitara Toto Montessori school over to its manager. Having only our Leavesden Montessori school to manage, freed up time to reflect on what we wanted in life. I had always dreamed of helping children in the poorer parts of the world through education, a dream which now started to feel like a gnawing ambition. An ambition which was soon shared by Dipak. Having experienced the significance of early years education and seeing the results we had achieved with our children, we were eager to use our expertise to the benefit of others.

In 2018 we travelled to Tanzania to meet with Sister Gaspara Kashamba, a friend I had made while attending a Montessori course back in 2003. Sister Gaspara showed us what she and her fellow Usambara Sisters had managed to set up in Lushoto, Tanzania: a Montessori pre-school, primary and secondary schools supporting children up to the age of 18, a Montessori training centre, a day medical facility, and a Hotel and Household Management training facility. In another area in Tanzania, Kwaludege (Kabuku, Tanga Region), one of the poorest areas in Tanzania, they had started a day medical facility and a secondary boarding school. When we noticed the students had to share textbooks for their final exams, we decided to donate more textbooks to their school. As soon as we returned to Nairobi we purchased and arranged the textbooks to be delivered to the secondary school. 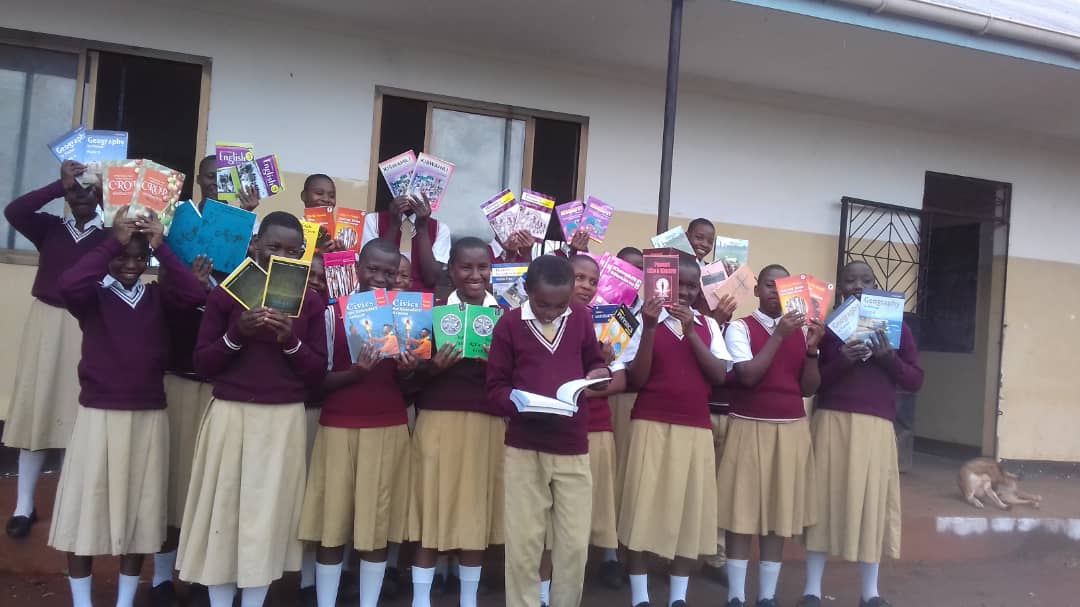 While visiting the Usambara Sisters' staff house, situated in the middle of cassava and maize fields, Sister Gaspara and I were gazing over the area. I noticed some small children playing in the fields and said: “Wouldn't it be nice to have a Montessori school in this area?”, and the dream of the Kwaludege Montessori Nursery School was born.

That dream quickly turned into reality when the first shovel broke ground in the cassava fields mid 2018 and the construction of the Kwaludege Montessori Nursery in Kabuku began. To facilitate official fundraising for our Tanzanian school and future projects, Dipak and I registered the Sitara Toto Trust with the Charity Commission (Registration Number: 1181602) in the United Kingdom. 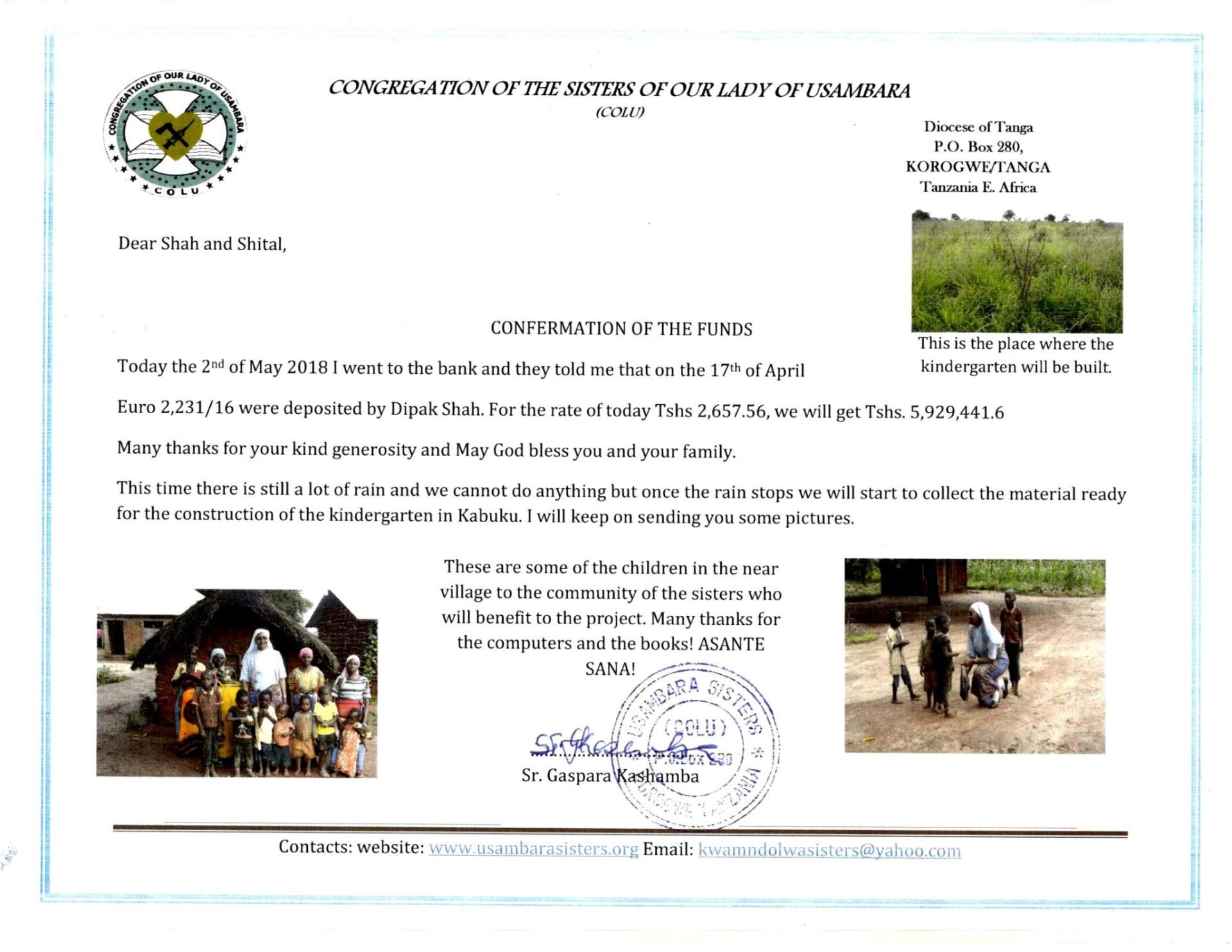 The first challenges we faced during construction were an absence of water and electricity. A reliable water source was essential for mixing cement on-site and electricity was needed to power a water pump and eventually supply the school with power. Our son Sunil stepped up to fund the finding of, and drilling for water in the area. Once the water was found, the Arthur Waser Foundation helped out to build the infrastructure needed to pump the water up. 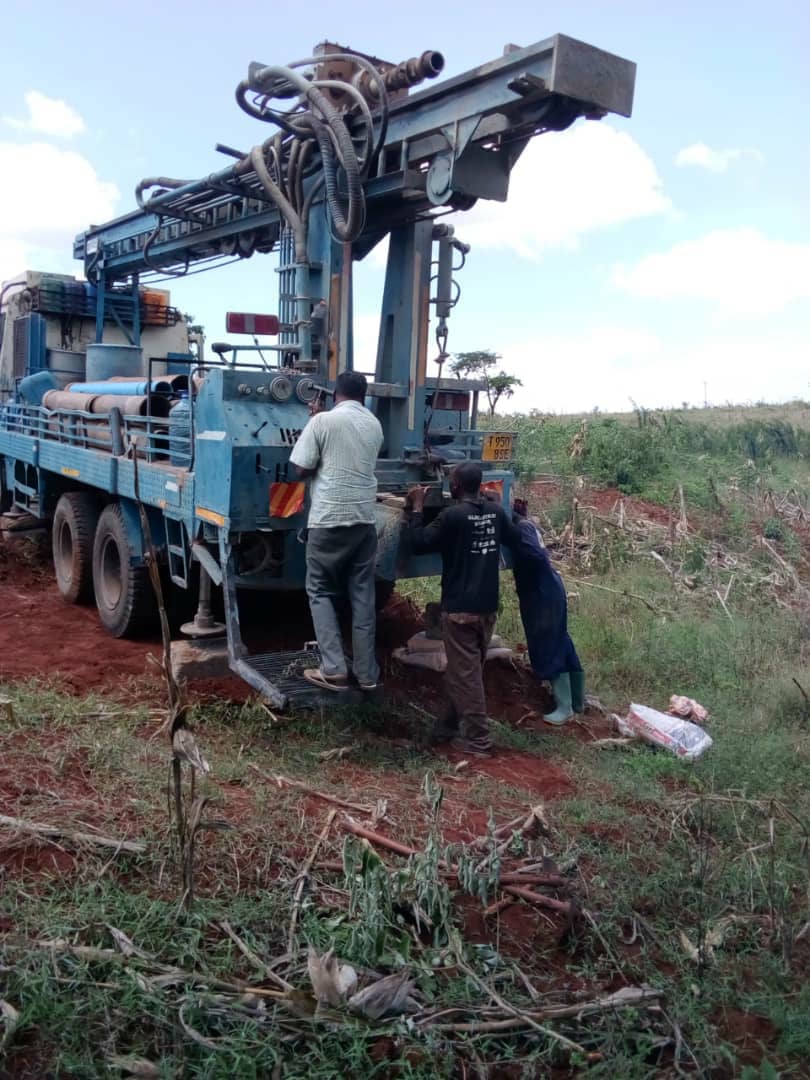 Our first Kwaludege Montessori Nursery building was ready to receive the first 13 schoolchildren in February 2019, which quickly grew to 40 students by the end of the year. To ensure the early continuation of the school on its way to becoming self-sufficient, the Sitara Toto Trust funded the salaries of two teachers. We also brought our Leavesden Montessori teachers over from the United Kingdom to Tanzania to show them our newly founded Kwaludege Montessori Nursery. During their visit, we were able to exchange ideas and experience with the Usambara Sisters, make Montessori educational materials, and they saw how much you can accomplish with limited resources.

Word of the Kwaludege Montessori Nursery soon spread in Kabuku, its popularity grew and parents from far and wide wanted their children to attend. Some children had to walk great distances to get to the school, while some parents arranged their own transport, which was often overfilled and unsuited to safely carry children to and from school. To improve this the Sitara Toto Trust bought a school bus for the Montessori Nursery in 2020. Now the school was safer to access, the number of attending children grew to 80 by the end of 2020. While we were raising funds to build an extra classroom for the older children of the school to progress, Sister Gaspara found a donor to help with the construction. That meant we could use the funds we had raised through the Sitara Toto Trust to purchase desks and chairs for the new addition to the school.

The growing number of students didn't stop there and by 2021 our Montessori School was providing 180 children with an education. The school bus was now making multiple trips per day carrying children to and from the school as far as 15 kilometres away. More children meant more fee paying parents, which was now bringing in enough money to pay for the staff salaries with enough left over to subsidise the school fees of the poorer children from nearby villages. However, the increased amount of students put a strain on the school bus and the classrooms. A new classroom was prioritised and funded by the Sitara Toto Trust, giving the school capacity to start transitioning children into the primary curriculum.

Looking to the future

The inspirational success of the Kwaludege Montessori Nursery in Kabuku and anticipation of the model Montessori primary school makes us enthusiastic to look towards the future and all the possibilities it contains.

During our last visit to Kabuku in 2022 we were able to see how far the Montessori Nursery had come and we met with Sister Gaspara, Sister Agnes (head of the Montessori school), and Sister Ruth (AMI Montessori trained director) to discuss future projects. Salient detail is that this meeting took place exactly four years to the day after we came up with the idea to found the Kwaludege Montessori Nursery. We have prioritised the following two projects for the immediate future:

Our first school bus now needs to make multiple trips to transport the continuously growing number of children to and from the school. The introduction of our first school bus caused a big increase in the amount of children attending the school, which also greatly increased the amount of children from parents able to pay the school fees, covering many costs of the school and subsidising children from poorer families who can't afford to pay fees. A second school bus will make it possible for even more children to attend our school, from both wealthier and poorer families, and will make it possible for children who live further away to attend the school.

The current water source is too salty and thus unfit for consumption until it has been filtered. A new water source with water fit for consumption will be a great improvement, opening the door for all sorts of possibilities within and beyond the school. Once a source of drinking water has been found, it is possible to use the existing infrastructure of the first water pump to access the drinking water.

Besides these high priority projects, we are looking to enrich the Kwaludege Montessori Nursery with:

We would like to give a big thank you to everyone that believes in our vision and shares our dream. Without your generous donations, efforts, and support, we would not have been able to achieve so much in such a short time. Every bit of help is welcome and appreciated. Please know that you are giving children the opportunity to grow, enrich their minds, shape their future, the future of their community, and beyond. 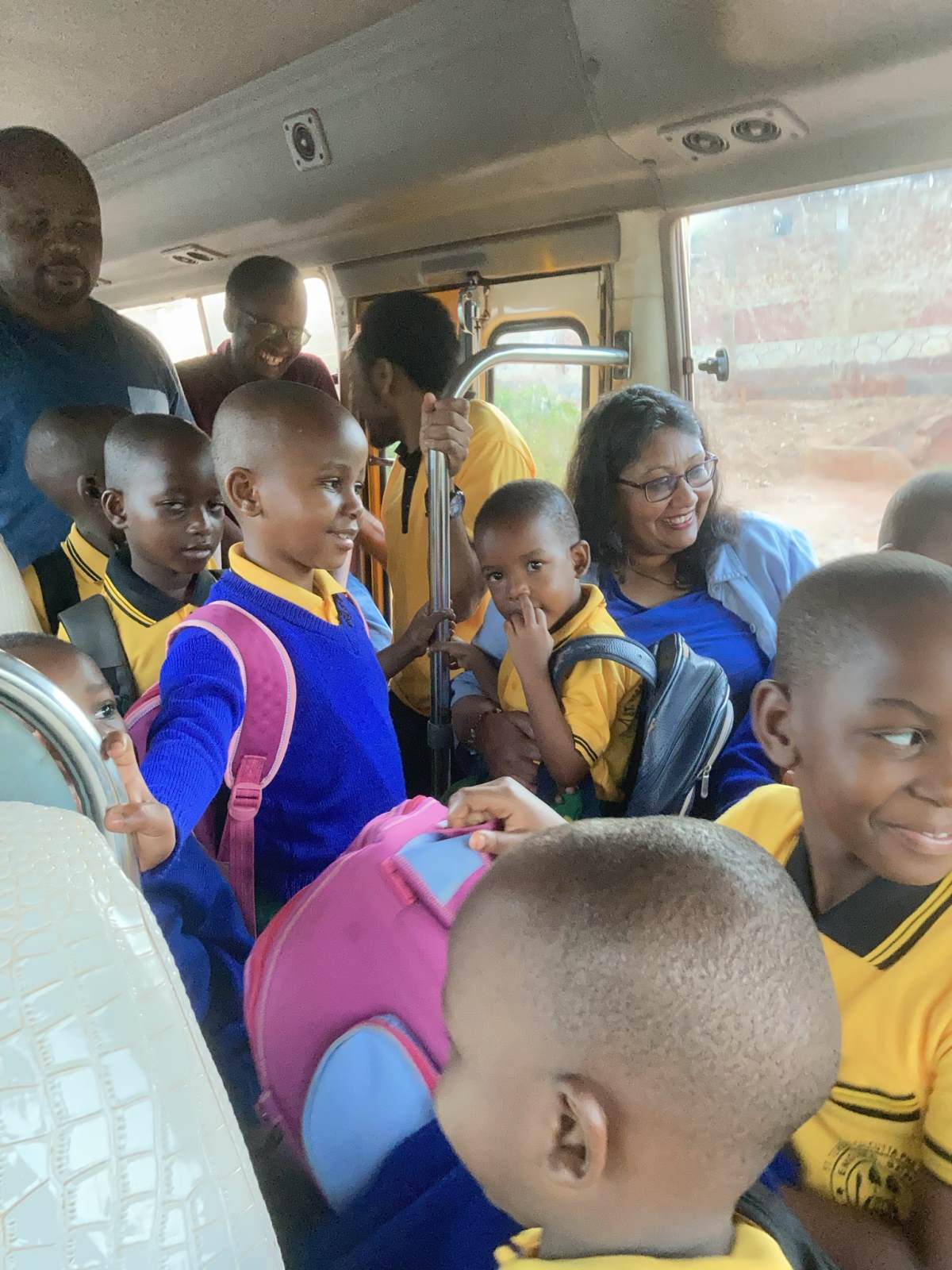 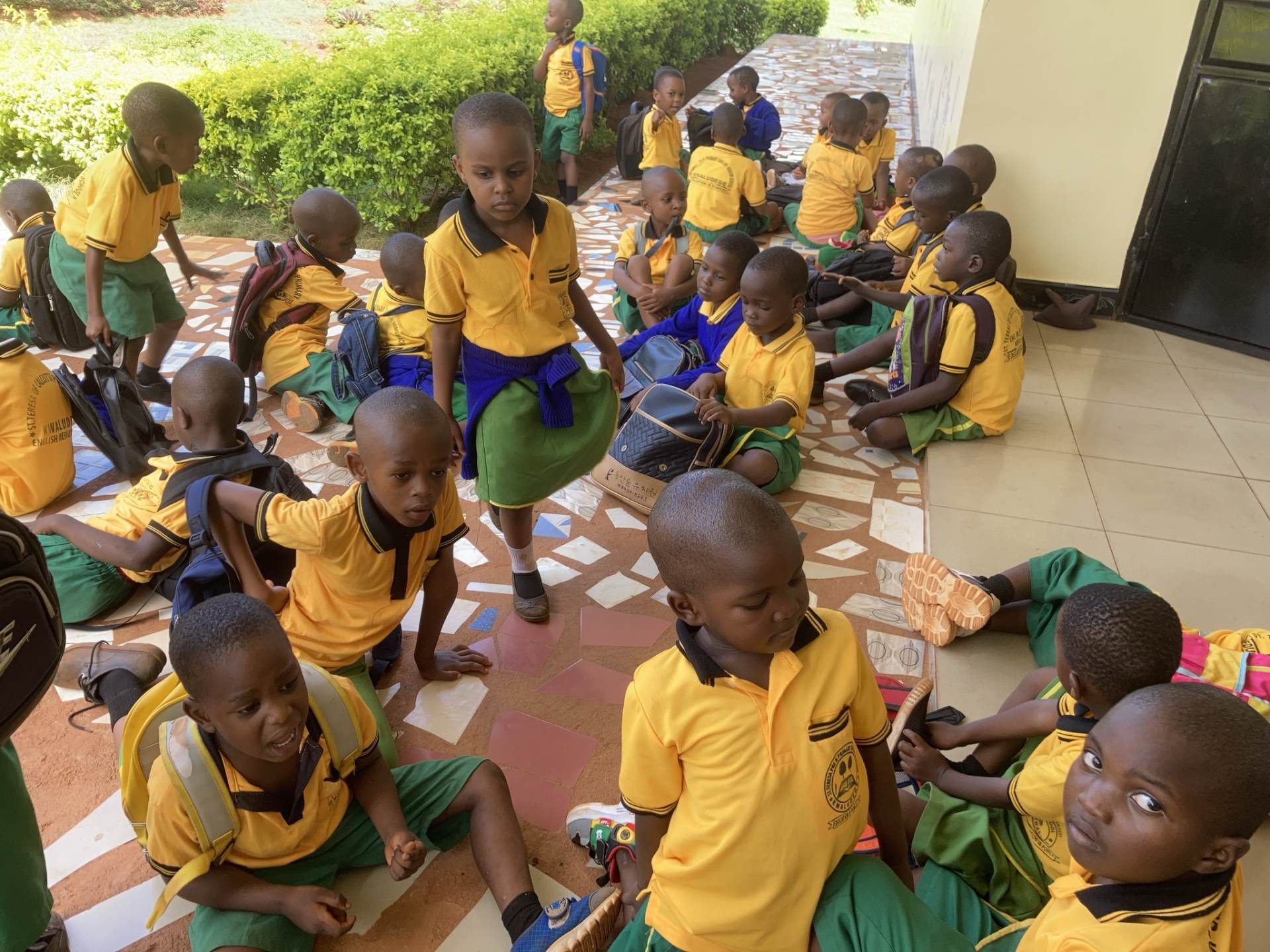 If you’ve gotten this far, you must be interested to get involved. To become part of sustainable changes in the poorest regions of the world, feel free to reach out to us and see how you can get involved. Contact us if you have any questions you’d like to ask, ideas you want to share, or if you want to know how you can donate to the Sitara Toto Trust. You can also donate here using Just Giving.

The Sitara Toto Trust is registered with the Charity Commission and Gift Aid is applicable to most donations. 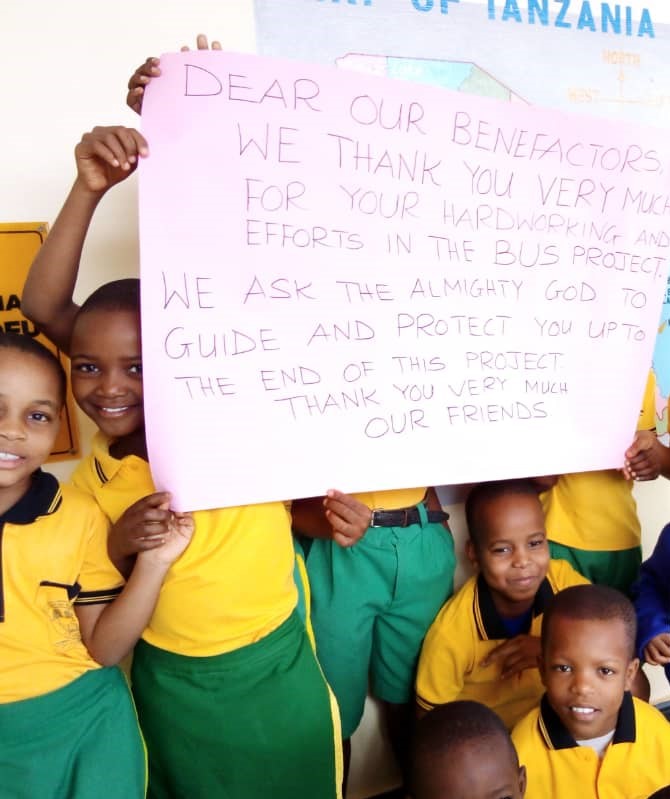